not so new releases:

december 1962, frank zappa engineered some recordings for the tornadoes in paul buff's pall studio in cucamonga. at the time, the tornadoes were managed by dave aerni, another paul buff / studio pal associate.  these recordings resulted in two 7"s that were released in 1963.

1999 saw the release of a sampler called "beyond the surf".  this sampler presented two 'new' tracks, also from the pal sessions.  these tracks were released seperately on 7" in 2000.  i guess these recordings are only of interest for the surf music fans (hey, dick dale, are you reading this?), but they present a fine little piece of zappa / buff / aerni history as well.

* * *
i went too waalwijk (the netherlands) yesterday to see cuccurullo brillo brullo and the muffin men.  liked it a lot.
guus was there as well, and he took some pictures, some of which you can find at:

visit http://www.muffinmen.co.uk for the latest info.

* * *
darn, i'm a bit too late with this, but please note that the foolz will be playing some zappa music:

* * *
regarding the magic band reunion,
http://www.beefheart.com/news/reunion.htm
says that the concert dates are as follows: 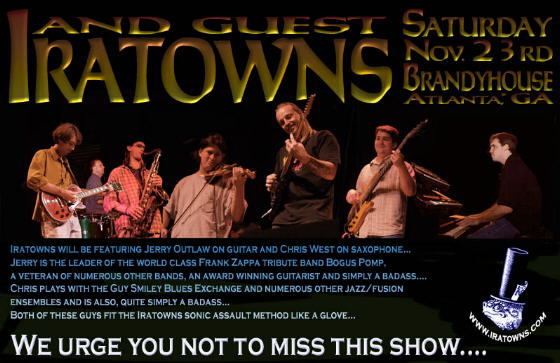 * * *
and be sure to visit andrew's www.idiotbastard.supanet.com
he's got a lot of news on the grannies, on vai, on candy zappa, and lots & lots more...