there's another interview with carl franzoni at:
http://www.sundazed.com/scene/exclusives/franzoni_exclusive.html 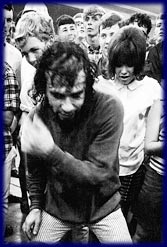 While the Byrds’ studio sound was forged at World Pacific, it was at Ciro's Le Disc that they became a true cultural force. It was here in early 1965 that the Byrds first connected with an audience, which included a group sometimes referred to as Vito and the Freaks. Led by sculptor/ dancer / ringleader Vito Paulekas, whose “Clay Vito” art studio at 303 Laurel Avenue also served as a temporary rehearsal space for the Byrds, the long-haired, colorfully-attired Freaks caused a stir with their frenzied dancing at a time when the Twist was the wildest thing going. Vito’s troupe had been dancing at local shows since 1962 (an early favorite was the frat/horn band Jim Doval & The Gauchos), but it wasn’t until they danced to the music of the Byrds that a genuine scene coalesced, with music and dance feeding off each other in a first burst of freedom. As much as the Byrds' music, the ecstatic gyrations of the Freaks made Ciro's the place to be.

The Byrds cannily brought a small crew of these dancers, led by Carl Franzoni (who did double duty as a roadie, along with soon-to-be Love guitarist Bryan MacLean), on their inaugural U.S. tour, thus spreading the Freak gospel to the hinterlands. Before meeting Vito in 1964, Franzoni, then already in his early 30s, had been a businessman, selling novelty items through the mail. Efram Turchick asked him to share his memories of those days:

“Vito suggested that I might take some clay sculpting classes. This class would only last 'til 10 o'clock, so at 10 o'clock all those people would pile into their cars and go to the local dance hall. And it just increased. For the first month or so I didn't dance. I went and watched them and looked what to do [laughs] to see their improvisations. And then one night I just went out there and I didn't stop. And I got out of the business I was in. I gave up my cars and motorcycles and just would show up at the Whisky and places like that and dance every night. And you gotta realize that I'm dancing right next to movie stars and their producers were in those audiences too, they could see what we were doing. And I got work out of it; they asked if I'd do movies and stuff like that. I did it for a while, and then I got busted for something major, so I just left town and I didn't even look over my shoulder. I came up north here, then I went back there and found that [the case] was thrown out of court.

“Vito was looking for a band to play at a teenage dance on Melrose Avenue, at a church, upstairs. We were interviewing bands, and a lot of bands came to Vito’s, but the Byrds had an audition and didn’t show up. A friend of ours went over to their house and called them a bunch of bums [laughs]. They had just had all their equipment stolen in San Francisco, and they were kind of down, I guess. Well anyway, they showed up the second time, and Vito hired them. The dance was for Stop the War in Viet Nam. There were signs everywhere — Vito made these signs and put them up. There were 200 people there. A lot of teenagers. Tons."

“The next night was their first night at Ciro’s, and ... we walk in this place, it’s a totally red room, lots of light, the best dance floor in Hollywood, it’s about 40 feet by 60 feet, all the stars in Hollywood are there; these guys have never played for them before. We stepped on the dance floor, and from then on it was music and dance for months and months! All right!"

“We were there at the start, maybe 15 of us, coming from this other dance the night before, or maybe a couple nights before. They just pushed us in there, we never paid. They said, ‘Come in, just come in.’ We were famous otherwise for dancing to other groups, like the Gauchos from Fresno. The Gauchos had horns and everything in their band, they were like a Top 40 band and played near Ciro’s at another place. We would go back and forth to Ciro’s and sometimes they wouldn’t even let us in because the place was so crowded."

“The teenagers in Hollywood latched onto these guys and called the teenagers in the Valley, their friends, and ‘Mr. Tambourine Man’ was trying to get started and on the radio, and those kids just wouldn’t let up. There were high school kids from Fairfax High School and the Catholic school in Hollywood. They wouldn’t get up off of ‘Mr. Tambourine Man,’ they just called and called and called. Because it was the first white rock and roll group with that kind of music and dance that they could relate to, you know."

“I went to [The Byrds'] house when they were on the bum. They had a little pad, a cold-water pad, and they didn’t have any hot water in the place, and they were miserable."

“My favorite Byrd was Chris [Hillman]. You know, when you’re on the dance floor and you look up and you make contact with whoever it is, I always made contact with the bass player. I could talk to Chris about what was happening. David [Crosby] was cantankerous, but you knew that there was a fine artist there. There was another guy who was not mentioned: Bryan MacLean. Bryan MacLean was their roadie, and I helped him roadie. Him and I roomed together on the road. He would have been the next Byrd, but Love liked him ... Arthur Lee liked him. He beat [later Manson Family member] Bobby BeauSoleil out for their rhythm guitar player spot, because we came and lobbied for him. They were auditioning him and BeauSoleil and it was a tossup. Why I'm telling you this is we had gone off the Byrds ... the Byrds were way past us then, they were traveling the world, going to England. We weren't their people anymore, we had gone to other bands. Jim [now Roger] McGuinn, one time in one of those rock and roll places, he passed me and said, ‘You know, Carl, I'm sorry.’ [laughs] ‘I apologize.’ and that was the last time I saw Jim.”

What was he apologizing for?
“Well, I think he didn’t realize what a good thing he had going with dancers. He was apologetic because we just kept doing it, kept doing our dance, and it just got better and better and it didn't STOP for us. I think what he missed was the people that came around him. Not just us, but those teenagers went to other bands."

“The Byrds were, in my estimation, the best dance band that Hollywood ever saw, because they made people dance with that kind of music. Those guys were forever fighting with each other, but when they got up there they really cooked. Love, they weren't the dance band that the Byrds were and neither was Frank Zappa. You had to do an improvisation to [dance to] Frank Zappa, you never had to do an improvisation for the Byrds, because they were so miraculous ... the combination of men, the different factions of what kind of music they came from, it just was such a fantastic blend. I always think of dancing to ‘Bells of Rhymney’ and like, it's a church, you know? So, when they brought that kind of music in to Minnesota, Iowa, places like that, those kids were just, ‘Wow, where did you come from?’ They could have started their own church with that kind of music they were playing. That 12 string guitar really worked good.”

What other songs were favorites to dance to?
“‘Hey Joe.’ We would just yell and scream when David was doing that. He would raise the temperature on that dance floor with that one."

“They asked me to pick a good amount of people to go with them [on tour] and we became the Byrds’ dancers. The tour was really something! The first place we went was Denver. We went into Minnesota, Youngstown, Ohio, Dayton, Ohio, stuff like that, I mean it was something to see, the way we danced! The kids were dancing in those lines at the time, line dancing, and we came in there and we broke up all that stuff ... I got punched a couple times because they didn’t like our style of dance! But after that the whole United States went into that style. We were trained dancers. Vito had studied with some really fine dance teachers in Hollywood. We had a formal place we went to, and the people who were right after us were Toni Basil and David Winters. They were the shit, big time dancers, and they would sit and watch us, and take what we were doing, and add it into their stuff.”

What was the atmosphere like on the bus as you toured around the country?
“Well, I brought some women, some good looking women that they could relate to. But they didn't really have to worry about that, girls were knocking on their doors as soon as they got in the hotel rooms! But it was pleasant for them to have a couple of the dancers there — they could talk to them and stuff like that. For the most part the women were really good dancers. I had to pick the best I could find. There was a guy who came with us — they didn't want any men — they really didn't want any guys. But I convinced them that this guy Bob Roberts should come. Bob Roberts became a saxophonist with Frank Zappa and Reuben and the Jets, and then he became a big-time tattooist in Hollywood. I was the freak, because I had my own kind of uniform: tights and boots and crazy looking shirts.”

It's a pretty unique situation where a band would take a whole bunch of dancers on the road with them like that.
“Yeah! That was the only one that ever did it for me! I went with Frank Zappa, but I went solo. He couldn't afford it. They [The Byrds] were ready to take us to England to show the English how to dance. We had a small nucleus of dancers and could have taken them to London and then those fucking Beatles wouldn't have been so uppity. I decided not to go. Derek [Taylor, Byrds publicist] wanted us to come to this high school gym and he was having people come and take photos and I just walked out of it. That's why they fired me.